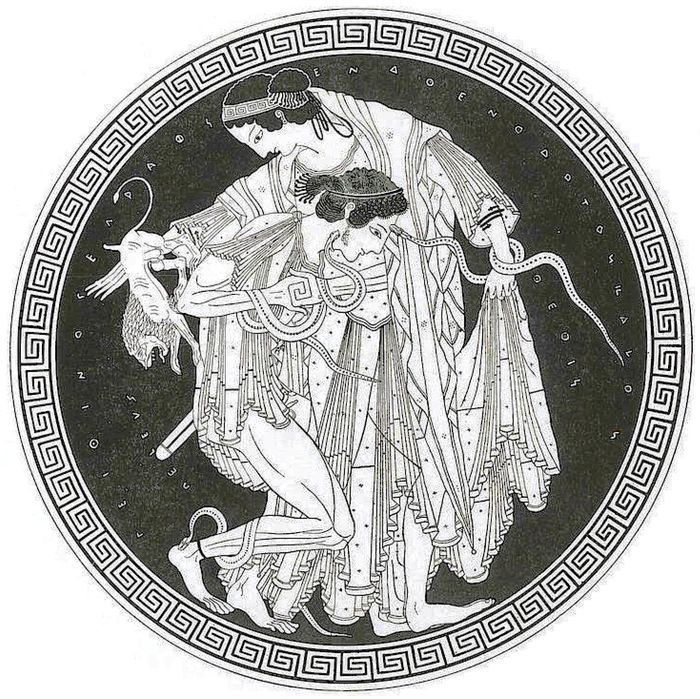 Although he was a late writer in the epic form, Apollonius treated ancient mythical material, but from the standpoint of a scholar and a literary stylist. He left his native land, Rhodes, and settled m Alexandria, then the centre of the cultured world. The tale of Phineus is not new, but the details which embellish it, and the verbal pyrotechnics which he lavished upon it, are highly characteristic of the decadent period in which it was written.

The present translation is that of R. C. Seaton, in the Loeb edition, William Heinemann, London, 1912. There is no title to the story in the original.

Phineus And The Harpies

There Phineus, son of Agenor, had his home by the sea, Phineus, who above all men endured most bitter woes because of the gift of prophecy which Leto`s son had granted him aforetime. And he reverenced not a whit even Zeus himself, for he foretold unerringly to men his sacred will. Wherefore Zeus sent upon him a lingering old age, and took from his eyes the pleasant light, and suffered him not to have joy of the dainties untold that the dwellers-around ever brought to his house when they came to inquire the will of heaven. But on a sudden, swooping through the clouds, the Harpies, with their crooked beaks, incessantly snatched the food away from his mouth and hands, and at times not a morsel of food was left, at others but a little, in order that he might live and be tormented. And they poured forth over all a loathsome stench; and no one dared not merely to carry food to his mouth, but even to stand at a distance, so foully reeked the remnants of the meal.

But straightway when he heard the voice and the tramp of the band he knew that they were the men passing by, at whose coming Zeus`s oracle had declared to him that he should have joy of his food. And he rose from his couch, like a lifeless dream, bowed over his staff, and crept to the door on his withered feet, feeling the walls; and as he moved, his limbs trembled for weakness and age; and his parched skin was caked with dirt, and naught but the skin held his bones together. And he came forth from the hall and sat on the threshold of the courtyard; and a dark stupor covered him, and it seemed that the earth reeled round beneath his feet, and he lay in a strength less trance, speechless. But when they saw him they gathered round and marveled, and he at last drew labored breath from the depths of his chest and spoke among them with prophetic utterance:

“Listen, bravest of all the Hellenes, if it be truly ye, whom by a king`s ruthless command Jason is leading on the ship Argo in quest of the fleece. It is ye truly. Even yet my soul by its divinations knows everything. Thanks I render to thee, King, son of Leto, plunged in bitter affliction though I be. I beseech you by Zeus, the god of suppliants, the sternest foe to sinful men, and for the sake of Phoebus and Hera herself under whose especial care ye have come hither, help me, save an ill-fated man from misery, and depart not uncaring, and leaving me thus as ye see. For not only has the Fury set her foot on my eyes and I drag on to the end a weary old age, but besides my other woes a woe hangs over me, the bitterest of all.

The Harpies, swooping down from some unseen den of destruction, ever snatch the food from my mouth, and I have no device to aid me. But it were easier, when I long for a meal, to escape my own thoughts than them, so swiftly do they fly through the air. But if haply they do leave me a morsel of food, it reeks of decay and the stench is unendurable, nor could any mortal bear to draw near, even for a moment, no, not if his heart were wrought of adamant. But necessity, bitter and insatiate, compels me to abide, and abiding to put food into my accursed belly. These pests, the oracle declares, the sons of Boreas shall restrain, and no strangers are they that shall ward them off” if indeed I am Phineus who was once renowned among men for wealth and the gift of prophecy, and if I am the son of my father Agenor; and when I ruled among the Thracians, by my bridal gifts I brought home their sister Cleopatra to be my wife.”

So spake Agenor`s son, and deep sorrow seized each of the heroes, and especially the two sons of Boreas. And brushing away a tear, they drew nigh, and Zetes spake as follows, taking in his own the hand of the grief-worn sire:

“Unhappy one, none other of men is more wretched than thou, me- thinks. Why upon thee is laid the burden of so many sorrows? Hast thou with baneful folly sinned against the gods through thy skill in prophecy? For this are they greatly wroth with thee? Yet our spirit is dismayed within us for all our desire to aid thee, if indeed the god has granted this privilege to us two. For plain to discern to men of earth are the reproofs of the immortals. And we will never check the Harpies when they come, for all our desire, until thou hast sworn that for this we shall not lose the favor of heaven.”

Thus he spake; and towards him the aged sire opened his sightless eyes and lifted them up and replied with these words:

“Be silent, store not up such thoughts in thy heart, my child. Let the son of Leto be my witness, he who of his gracious will taught me the lore of prophecy, and be witness the ill-starred doom which possesses me, and this dark cloud upon my eyes, and the gods of the underworld —and may their curse be upon me if I die perjured thus—no wrath of heaven will fall upon you two for your help to me.”

Then were those two eager to help him because of the oath. And quickly the younger heroes prepared a feast for the aged man, a last prey for the Harpies; and both stood near him, to smite with the sword those pests when they swooped down. Scarcely had the aged man touched the food when they forthwith, like bitter blasts or flashes of lightning, suddenly darted from the clouds, and swooped down with a yell, fiercely craving for food; and the heroes beheld them and shouted in the midst of their onrush. But they, at the cry, devoured everything and sped away over the sea afar, and an intolerable stench remained. And behind them the two sons of Boreas, raising their swords, rushed in pursuit.

For Zeus imparted to them tireless strength; but without Zeus they could not have followed, for the Harpies used ever to outstrip the blasts of the west wind when they came to Phineus, and when they left him. And, as when, upon the mountain-side, hounds, cunning in the chase, run in the track of horned goats or deer, and as they strain a little behind, gnash their teeth upon the edge of their teeth in vain; so Zetes and Calias rushing very near, just grazed the Harpies in vain with their fingertips.
And assuredly they would have torn them to pieces despite heaven`s will when they had overtaken them far off at the Floating Islands, had not swift Iris seen them and leaped down from the sky from heaven above and checked them with these words: “It is not lawful, O sons of Boreas, to strike with your swords the Harpies, the hounds of mighty Zeus; but I myself will give you a pledge, that hereafter they shall not draw near to Phineus.”

With these words she took an oath by the water of Styx, which to all the gods is most dread and most awful, that the Harpies would never thereafter again approach the home of Phineus, son of Agenor, for so it was fated. And the heroes, yielding to the oath, turned back their flight to the ship. And, on account of this, men called them the Islands of Turning, though aforetime they had called them the Floating Islands. And the Harpies and Iris parted. They entered their den in Minoan Crete; but she sped up to Olympus, soaring aloft on her swift wings.

Meantime the chiefs carefully cleansed the old man`s squalid skin, and, with due selection, sacrificed sheep which they had borne away from the spoil of Amycus. And when they had laid a huge supper in the hall, they sat down and feasted, and with them feasted Phineus ravenously, delighting his soul as in a dream. And there, when they had taken their fill of food and drink, they kept awake all night, waiting for the sons of Boreas. And the aged sire himself sat in the midst, near the hearth, telling of the end of their voyage and the completion of their journey.